cold and snow
sleepy puppy in my lap
winter’s warmth

My father put out suet and seeds for the birds and squirrels that made their home in our back yard, shaded by close to a dozen old cottonwood trees, a newer maple, and a hedge of tall lilac trees with purple flowers at springtime, a hedge along the north and west sides of the double lot. One of my brothers now lives there with his wife, where his children and their children gather.

I wrote a poem related to this photograph in 2000, republished in a blog post titled “Going Home” in 2015. The squirrels would also climb up the screen windows looking in on our breakfast table, impatient for us to finish eating, at which time Dad would feed them the leftover pancakes on the back porch.

flowers whisper
secrets from the old days
waiting for the dawn

As the day grows old, as all days do, longing for the cool of night no longer wakes the mind. Dreams turn into smoke that does not shelter from the lingering heat of sun’s strong rays. The mind wonders—wanders. Vicious cravings for victory drown beneath the surface of the longing for kinder truths…for camaraderie that wasn’t…old friends who never were…conversations that were really only one way—battles to be fought and never lost, no matter what the cost.

Odd trains of thought while exercising in the gazebo, first thing this morning, left me with this poem for #RonovanWrites #Haiku Weekly Poetry Prompt Challenge: Old and Days.  I hope to be inspired to write one in a different vein before the week’s end.

pingback: Challenge #199: Obsessed and You. 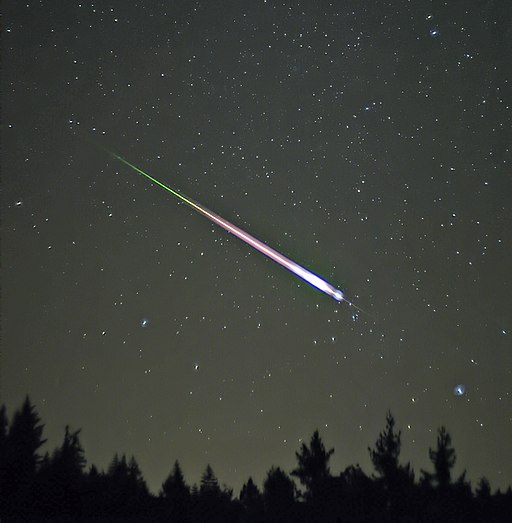 My husband and I stood on the front steps during a meteor shower, one cold night, staring at the sky. Marvelous to share the wonder.

Pingback: #RonovanWrites #Haiku weekly prompt no. 188 – Quick and Slip, and information on how to take part in this weekly writing challenge.

Photo by Navicore (Own work) [CC BY 3.0], via Wikimedia Commons

do not prove that mere belief
cannot alone shift your course

Guidelines for participating in this weekly challenge can be found at http://ronovanwrites.com

dreams don reality
as a cloak of illusions
hiding hope away

synonym: magic=illusion
definition: don=put on; get dressed in; slip on (or into)

I am not certain that I am looking toward the new year with joy, but I feel as though I’ve worn out this one (and the last) quite thoroughly. Or, they’ve worn me out. A bright spot in my life was the on-line Introduction to Japanese Poetry workshop I attended, which covered writing/understanding haiku and tanka, each form getting two weeks of study and practice. Quite involving!

The second bright spot that stands out is the bereavement counseling from the local hospice organization. Stimulating discussions with several counselors and new thoughts to think about life and death, loss and revelations. Two books stood out for me. The first is a book of poem by Barbara Crow: Coming Up for Light and Air, which title I came across and then searched out from independent sellers of second-hand books. I got an autographed copy, and also two other used copies, one of which I gave to my first HRRV bereavement counselor. The second is Grief and Bereavement in  Contemporary Society: Bridging Research and Practice (Taylor & Francis, June 2011); in particular, the article “Giving Voice to Nonfinite Loss and Grief in Bereavement”, by C.L. Schultz and D.L. Harris. As one approaches old age, nonfinite loss is surely a factor in quality of life.

The third bright spot that stands out, other than having made contact with cousins at an aunt’s funeral (although I did not think to ask for USPS contact information or email addresses). I did find another of the cousins who live on the West Coast on Facebook.

And this year included not one, but two poem-a-day challenges with the same group of people. I participated in both NaPoWriMo in April and a write-along during NaNoWriMo (November).  I held back some of the poems from my Quiet Spaces Journal for reworking, and also for submission someplace, if they turn out the way I hope.

what were those hours and minutes
when measured against decades
of a long life well and fully lived?

a smile, briefly known and always loved,
the joy of songs and sighs and laughter
faded now in the vacuum left behind,
short-lived breeze that warmed,
then cooled again